The matter up for discussion in this month’s article is whether Leonardo da Vinci was a chess player. Although this unresolved doubt may not disturb your otherwise peaceful existence, you might be interested to know that he was, in keeping with his incredible personality, more than just a simple chess player.

The story started a few years ago (2006), when a booklet titled De Ludo Scachorum (About the chess game) was found amongst over 22,000 volumes donated by Count Guglielmo Coronini Cronberg to the library of Gorizia (a little town in the Friuli Venezia Giulia region). The booklet contained numerous practical demonstrations for moves with the relative indications for their solution. The subject of chess games, with concrete applications of mathematical and logical principles was signed by Fra’ Luca Bartolomeo de Pacioli.

This man was a Franciscan friar, great mathematician and seminal contributor to the field of our modern accounting. Since he was the first person to publish a work on the double-entry system of book-keeping, even dealing with budget and inventory, he is known as “The Father of Accounting”.

In 1497, he accepted an invitation from Duke Ludovico Sforza to come and work in Milan, where he met, taught mathematics to, collaborated and lived with Leonardo da Vinci. It is known, in fact, that in Milan the two established a relationship of deep friendship and mutual cooperation, to the point that in some of Leonardo’s manuscripts we can still find many traces and notes of the Pacioli lessons.

Learned discussions at the Milanese court, brought the two to produce three copies of the famous inspirational platonic treatise De divina proportione (On the Divine Proportion) finished in 1498, one copy of which is kept at the Biblioteca Ambrosiana in Milan. Its text refers to the mathematical proportions, known as the golden ratio, and their applications to geometry, visual art through perspective, and architecture. The clarity of the text and Leonardo’s excellent diagrams helped the book to achieve an impact beyond mathematical circles, popularizing contemporary geometric concepts and images.

Based on this evidence, experts are now quite sure that the couple of friends also worked on the final version of the De Ludo Scachorum. Actually some experts think that unfortunately the original was lost, but we know of its existence through some Pacioli writings addressed to the Doge of Venice Leonardo Loredan, where it is cited in a request for printing privilege. 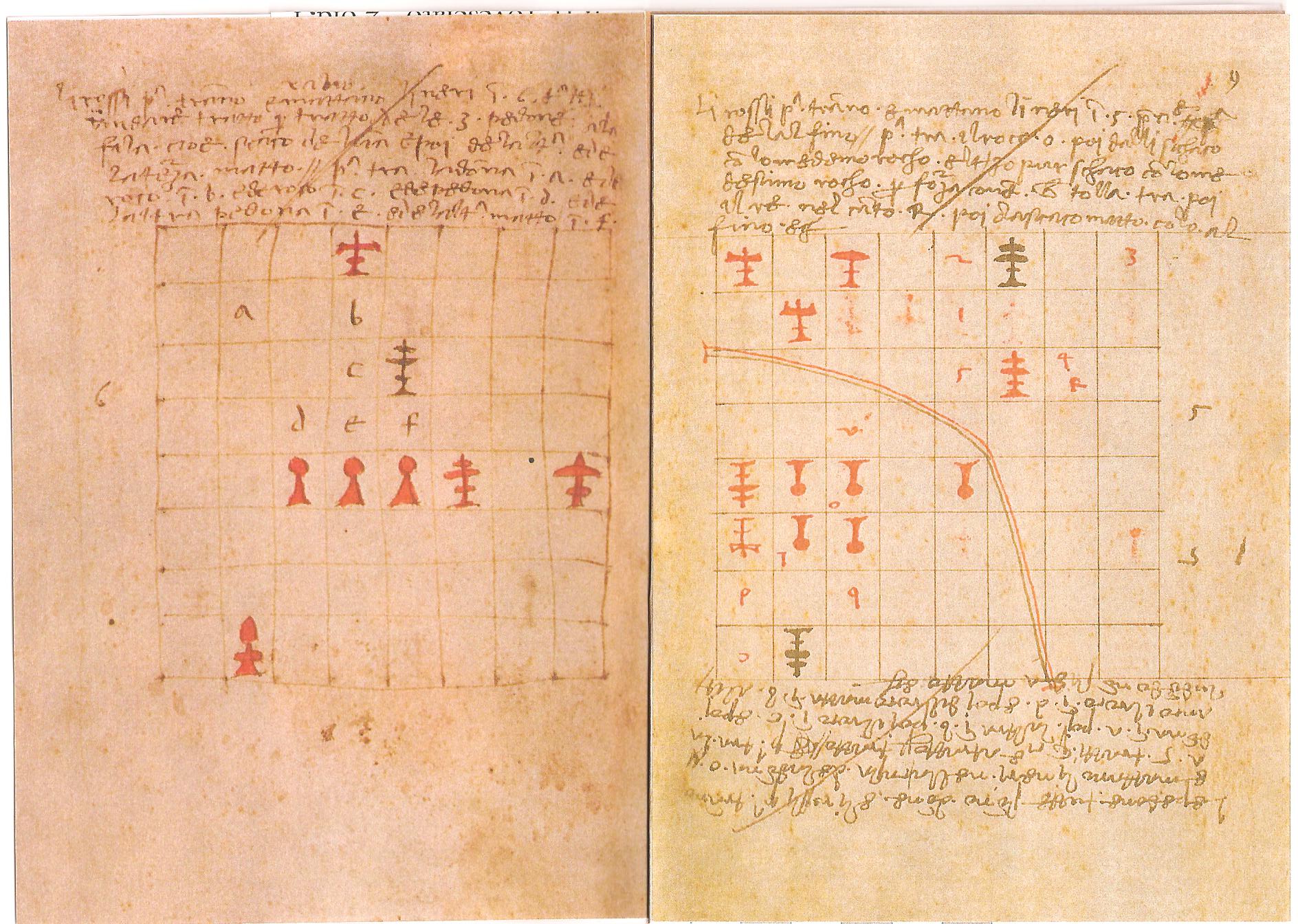 In 2008, after an intensive evaluation of the manuscript, the architect Franco Rocco, connoisseur of the history of chess, thinks that this pocket size booklet was just a draft, probably a gift to the Marchioness of Mantua, Isabella d’ Este. Anyway, according to the watermark on one of its pages, the date of 1497 is sure, and Leonardo’s touch is quite evident in the 114 schemes, if compared to those of other contemporary chess documents.

Rocco highlights the crucial importance of the Renaissance period for the history of chess, particularly the latter years of the fifteenth century, when the medieval game was played mainly by women. To pay tribute to the feminine part of the Creation, after the crowning of Isabella of Castile (Spain 1474), and her crucial arrival, on the 7th November 1489, at the siege of Baza, the principal city of the Moorish kingdom of Granada, the rule for the Queen chess piece was revised in the form called “alla rabiosa” (the angry).

The manuscript of Gorizia explains this evolution, presenting the game according to the two variants: the previous Medieval and the Renaissance revised which allows the possibility of castling, and the Queen has new moves. In comparison with older treatises where the pieces on the chessboard are indicated by their name or by outlined figures similar to ideograms, in the Pacioli forty-eight card manuscript, the designs of the board and the colored pawns in red and black are represented in reality clearly distinguishable from each other, characterized by perfect proportions, with a refined design never seen before. 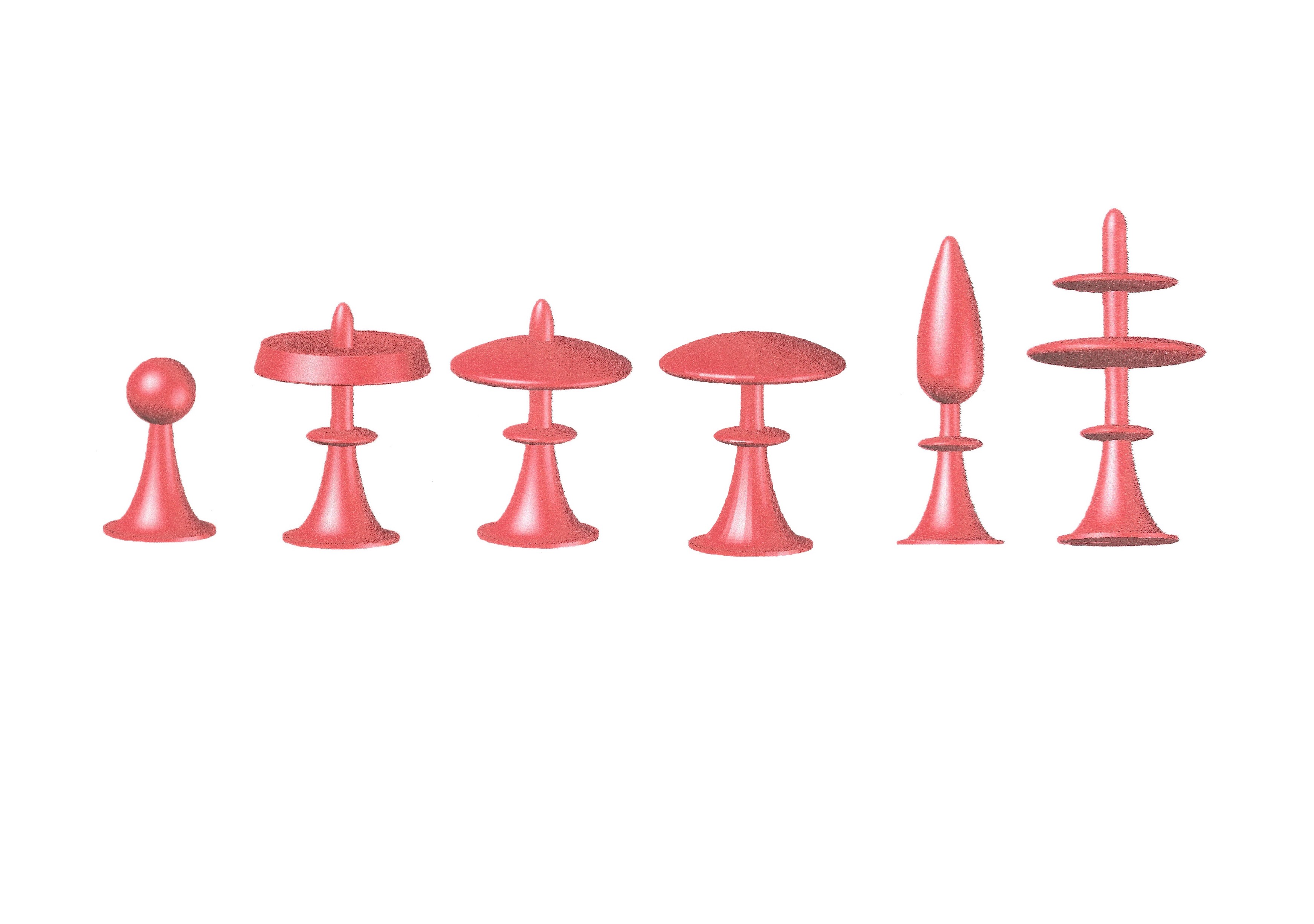 Since Leonardo was the first to allude to chess moves in the current usage, and showed the solution of a puzzle that appears in Windsor 12692 large sheet (kept at The Windsor CastleRoyal Library and unfortunately confused among the other 153 pages) to the point that we could even attribute to him the innovative Queen chess rule among his many other inventions.

On Thursday 8th September at 18.30 during a conference in Italian Franco Rocco and the art critic Vittorio Sgarbi will present incontrovertible evidence of Leonardo’s participation in the completion of the booklet, and open this exhibition:

Art@PwC
Viale Monterosa 91 • M1 Duomo, M3 Montenapoleone
Open Tues, Wed. Fri.10.00-18.00; Sat. 14.00-18.00
• From 9 to 30 Semptember. “La Via Geometrica. Da Scaccomatto agli Scacchi di Leonardo da Vinci”, by the architect Franco Rocco, first of all highlights the fundamental role of Leonardo da Vinci in the evolution of the game of chess. Furthermore it pays tribute to the German Bauhaus with an exposition of amazing and modular chess pieces molded in bronze. 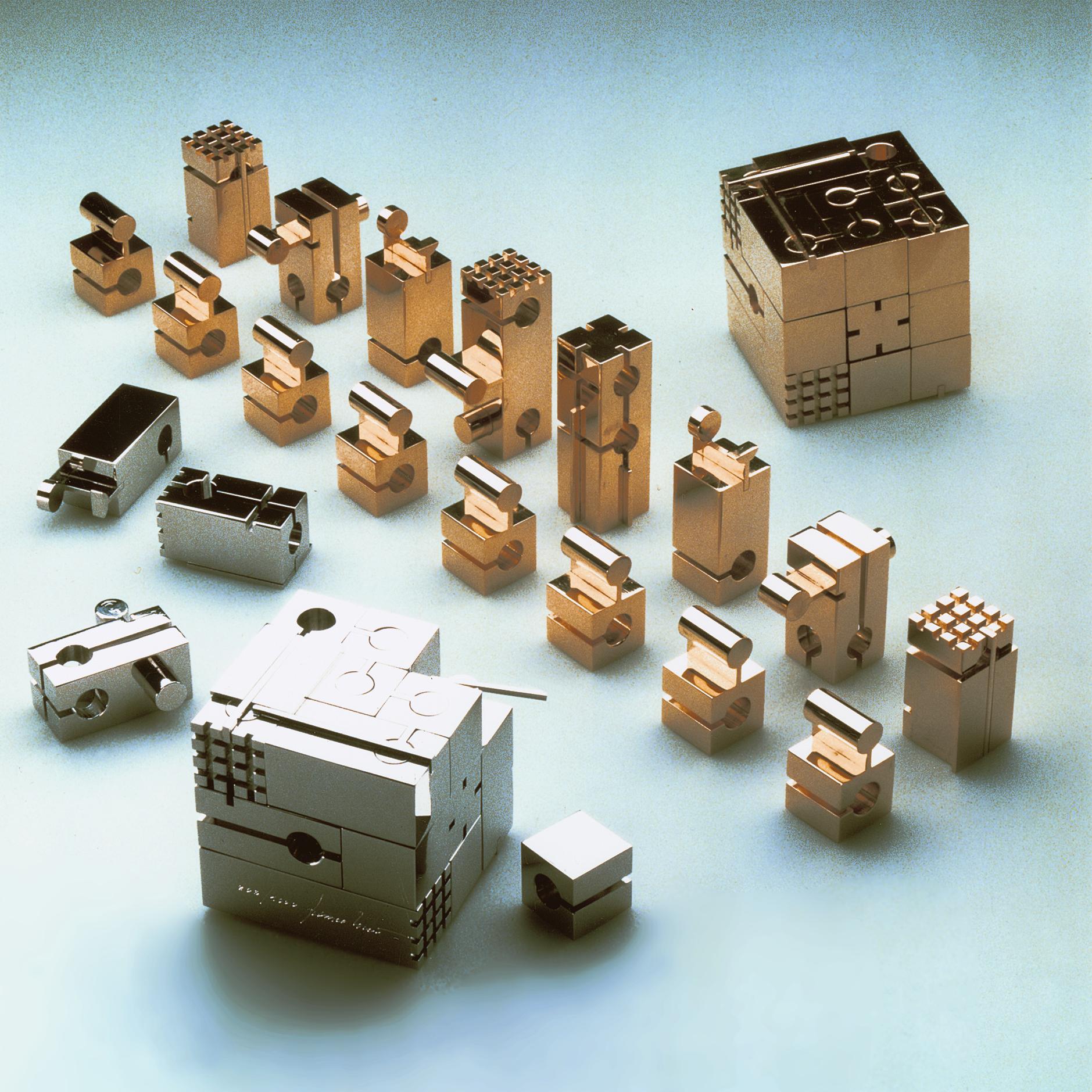 At the same time, a video presents the meticulous research made on De Ludo Scachorum. On show also “The Way of Columbus”, another fundamental work by Rocco, a sphere made ​​up of thirty-seven parts in wood and bronze that can be opened and disassembled while being guided by the symbols engraved on its surface as if penetrating into a labyrinth. The exhibition is completed by two sculptures in bronze lost wax: “Janus” and “The Word and Gesture” about the risks faced by nature due to the acts of men.