This is a story with a happy ending, without any connection to the 1951 American drama film “A Streetcar Named Desire” directed by Elia Kazan, starring Vivien Leigh and Marlon Brando!

This article is about another international “star,” the timeless 1920’s-style white and yellow tram, with dark and shiny teak benches and the interior illuminated with corolla-shaped glass lamps. It is one of the most photographed symbols for visitors to the city. Virtually an unofficial emblem.

It was on 20th November 1927, when for the first time a car of this new model, revolutionary for the time, made its entry clattering on Milan’s tramlines. 90 years later, it is still operating, full of energy, well restored, and even offering new proposals.

In the 1920s, when increasing traffic on the Milan urban tramway network required the renewal of the public transport infrastructure, the Municipal Tram Office decided to design a new type of streetcar, built on two bogies. It was similar to a model introduced by Cleveland Railway commissioner Peter Witt, who designed a model of streetcar known by his name, that was used in many North American cities, most notably in Toronto and Cleveland.

The Carrelli Milan streetcar was designed by the municipal engineers in 1927. After a few tests, a couple of prototypes were brought into service by the end of the same year.

Their name was inspired by the two bogies (namely “carrelli”) under the long steel chassis. This was the feature imported from the USA.

The undisputed success of those preliminary models resulted in the production of 500 units, called “1928” from the year of production. The structure was produced by Carminati & Toselli, a company that had a workforce of over 1,300 metalworkers. (Today the former factory has been transformed into a venue for exhibitions and events called “Fabbrica del Vapore,” the “Factory of Steam”).

The bogies were built by Fiat, while the electrical equipment was by Ansaldo and TIBB (the latter is the acronym of Tecnomasio Italiano Brown Boveri company, which built underground trains over for a century, and is now included in the name of the Lodi TIBB stop on Metro Line 3).

This notable production effort enabled the streetcars to be delivered from 1929 to 1930. They were immediately put into service.

In 1929 one of the first units was sent to Frankfurt and tested on the tram network there, without success. Another unit was sold to Brussels, where it became the model for the series 5000; more were sent to Madrid.

In 1932–1935 some cars were equipped with an experimental half door at the tail, and from 1938 to 1940 with the complete rear door as it appears today. So the Peter Witt system was abandoned after just a few years of service.

During the Second World War many trams were seriously damaged, but only one unit had to be scrapped. The others were repaired or reconstructed from 1945 to 1949. 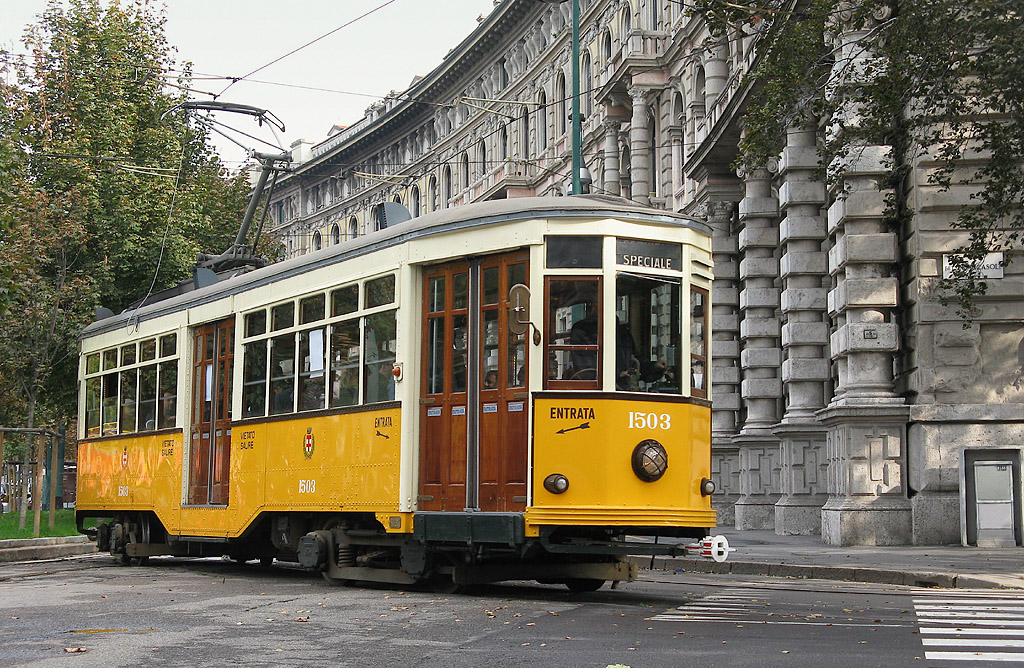 Many of them were sold to the American cities of San Francisco and San Jose, where they now operate as museum streetcars.

Another tram was partially rebuilt for double-ended “keep left” operation in Australia, and it ran briefly in Melbourne. It is now at the Sydney Tram Museum.

From 1972, the traditional trolley pole, which often came off of the power line cable, causing traffic jams and forcing the driver to get off quickly and put it back by hand, was substituted by the more convenient system of pantographs as used today.

In those years, municipal policy tended to privilege bus lines, and some trams were put into storage and later demolished.

To date, there are 125 Carrelli trams still in circulation. Externally they still have their original charm, painted in the white and yellow livery that was used on the prototypes. They have acquired a new dimension of significance, since they do not produce air pollution, and have prompted technological innovation and constant modernization.

In fact, four of them, called ″Tram Bianco” (white tram), are available for a 3-hour rental service. They can accommodate up to 60 passengers and can be equipped with live music, catering, decorations and a private photographer, perfect for parties for children, stag or hen nights, or business parties.

Another Carrelli street car, called “Scuolaintram” (namely lessons-in-tram), has a glittering silver livery and metal furniture recalling sci-fi films. It welcomes elementary school pupils and accompanies them around the city.
Two others have been transformed into touring restaurants, in a tourist project called ″ATMosfera″ (namely ATMosphere, a play on words since ATM is the acronym for Milan Transport Company). They start every day at 20.00 and 20.30 from Piazza Castello. On board there are tables for 4 or 2 people, with a total of 24 seats, as well as a kitchen, wardrobe and toilet. They serve different menus with meat, fish, or vegetarian meals, but it is necessary to book in advance.

On Saturday 2 and Sunday 3 December, from 10.00 to 19.00, ATM opens its doors to the general public showing all its treasures, letting children and adults have fun for free. A great opportunity to learn more about one of Milan’s most useful companies.

On this occasion, considering its 90th birthday, we couldn’t miss wishing the Carrelli streetcar a long clattering future, touring happily on Milan’s rails.