For sure you know about the prehistoric family of Fred Flintstone and his wife Wilma, living in the little city of Bedrock with their friends Barney and Betty Rubble, and their Dino-dog (Snorkasauro). They were aided in their daily chores by all sorts of prehistoric equipment such as a car with stone wheels; a baby woolly mammoth used as a vacuum cleaner; an adult woolly mammoth acting as a shower by spraying water with its trunk; elevators raised and lowered by ropes around brontosauruses’ necks; “automatic” windows powered by monkeys on the outside …. and so on.

Certainly these Hanna and Barbera cartoons were the delight of both young and old when watching the TV in the 60’s, but now they could be a sort of useful preparation for our prehistoric future.

In fact now in America there are scientists who assure us that in something like 10 years, they will be able to replicate and clone a live dinosaur. Yes, this is for real, according to the paleontologist Jack Horner who worked on “Jurassic World” and the “Jurassic Park” series of films! In fact, since 1993, when the first Jurassic movie came out, he has been working together with the newly-graduated paleontologist Mary Schweitzer.

According to their studies, and contrary to the plot of the film, no one has ever found intact dinosaur DNA, since it starts coming apart as soon as a cell dies, and it is certain that there isn’t any trapped in something like amber, however, it could be possible to extract it from dinosaur bones.

Leaving aside the solution in the film, which was to fill in the gaps in the dino DNA with frog DNA, since this would simply create a frog, Horner says that is important to understand that on our planet some direct descendants of dinosaurs are still thriving, namely our birds, who are specifically avian dinosaurs.

Even though over time, their snouts turned into beaks, their tails disappeared, and their prehistoric limbs evolved into more modern plumed wings, birds have certainly maintained genes of their tails, or arms, or snouts, and presumably, those traits exist inactive in their genetic code, together with the newer genes for wings, feathered tails and beaks.

Horner thinks that it is possible to suppress those new genes and dig up the dinosaur’s instead.

Apparently he is ready for this challenge. The bird elected for the experiments is one we’re all familiar with, a chicken, which after some attempts will probably produce a “chickenosaurus,” or alias a “dino-chicken”, possibly a small, feathered creature, with a tail that helps it balance, two small arms with claws, and a toothy snout, instead of a beak. Paleontologists remind us that “velociraptors” were just the size of a large turkey.

Well, this quite incredible story is just a way to announce something which recently happened in Milan, since for the first time a team of paleontologists from our Natural History Museum, lead by Cristiano Dal Sasso, publicly displayed the remains of a “Titanosaurus”, a titanic lizard, which was the biggest animal ever to have existed on earth. 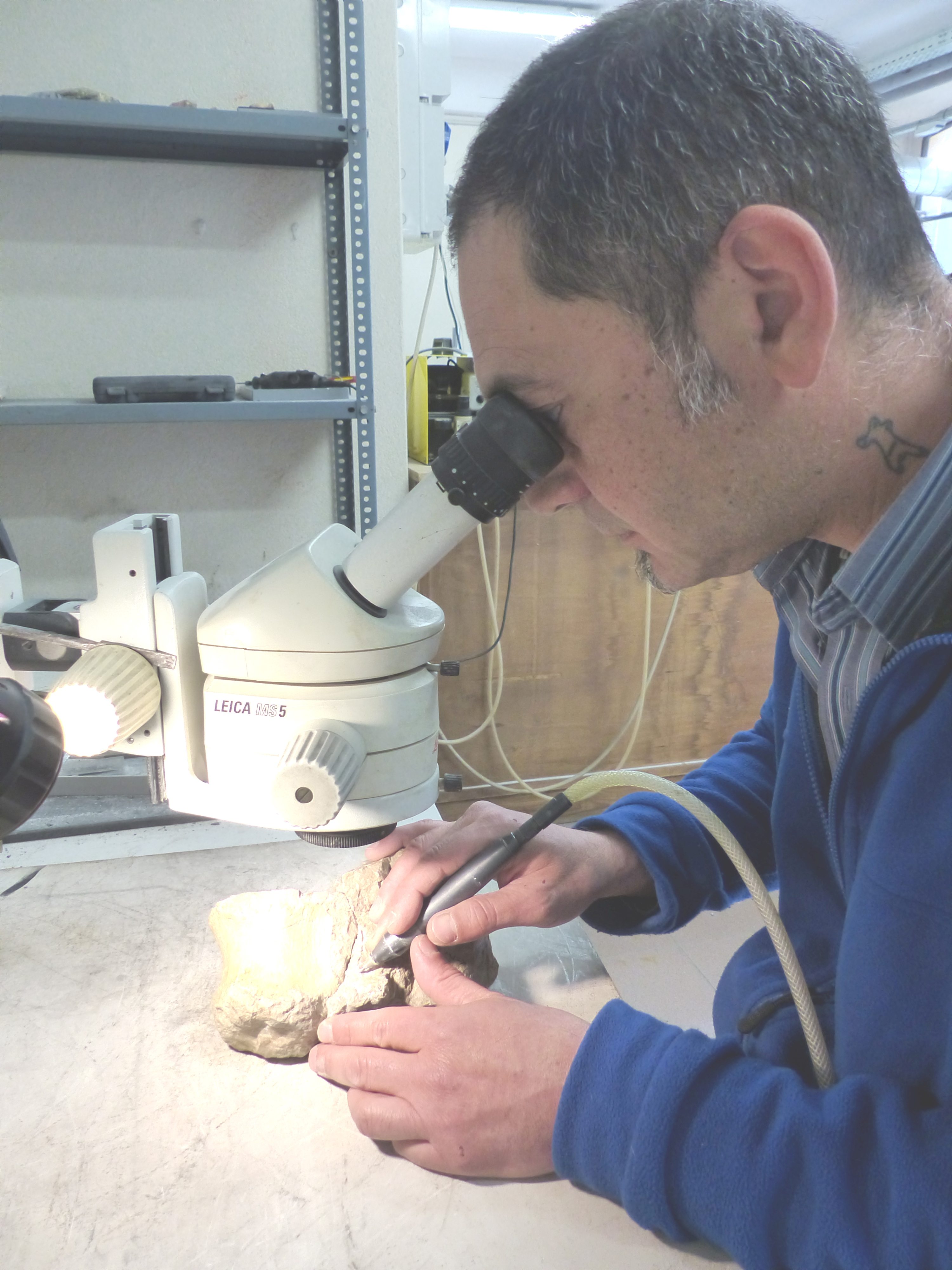 In the MSN Milan Paleontology laboratory, Fabio Fogliazza skilfully uses a pneumatic bit to remove the rock which has entrapped Tito’s vertebra for 112 million years.

Titanosaurus belongs to the sauropod dinosaur family which was first described by paleontologists in 1877. They are estimated to have grown up to 12 meters long and about 13 tons in weight.
The bones exhibited in Milan, just one vertebrae and two pelvic fragments, belonged in fact to this kind of long-necked four-footed herbivore, nicknamed Tito, who probably measured “only” about six meters in length and weighed some 600 kilos, since possibly he was not yet fully grown when he died.

According to what paleontologists said; “Those bones are unique in the world, and we might even be faced with a new species” that possibly reached Italy by walking from Africa around 112 million years ago.

The three bones found, positioned on a silhouette of a Titanosaurus.
Drawing by Marco Auditore

These fragments of an African migrant puppy were recently discovered in the Prenestine Hills near Rome, and are reshaping prehistoric European geography for researchers, demonstrating that Italy in those times was linked to Africa and normally used as a passage towards the North by crossing the Tetide sea, progenitor of the Mediterranean.

Knowing all this, do you think that maybe, in a not so distant prehistoric future, we’ll be keeping a dino-chicken similar to the Flintstones Dino-dog in our gardens, and perhaps even have a titanic long-necked creature similar to Tito, helping us with our heavier chores?

Those interested can pay a visit to Tito’s bones in our Museo di Storia Naturale, Corso Venezia 55; M1 Palestro