This article begins with a question for our readers: “What do you know about Milan”?

Almost all foreigners usually say that it is the city of design and fashion, some recall that it is the Italian capital of the economy, others say that it is mainly industrial, many recognize that it is famous as the place to see Leonardo’s Last Supper, opera enthusiasts love it as the home of the Scala … but nobody replies that in Italy Milan is the city with the largest agricultural area and a remarkable farming productivity.
Yes, in such a little area, if comparing Milan to other cities, there are 60 farmhouses, located among green fields and far away bus stops.

All in full swing, besides following the obvious corporate entrepreneurship, they are even active in the protection of rural territory and valuable common benefits such as landscape, environment, soil and water.

In fact, the Padana Plain is characterized by an abundance of water that in the center of Milan incredibly flows hidden among the foundations of the houses, but when left free under the ground it can spring up to the open air. Back to the surface, this water has a temperature between 9° C in the winter and 15° C in the summer, which for centuries has been exploited for farming in water-meadows.

Commonly attributed to Cistercian monks from France, from the twelfth century to a few years ago, this typically Padano system was intended to flood the fields so that the water slowly descended on the gentle slopes of the ground, thus avoiding winter frost and irrigating the soil during summer drought.

In this way, peasants could get up to 9 crops of forage grass all through the year, against the 4 or 5 usually produced from a normal meadow.

Therefore, the natural evolution of this enormous quantity of fodder intensified bovine breeding since from late February to November the livestock could be fed with fresh grass, producing high quantities of excellent milk. Thus, it is obvious that the production of cheese had to be started in order to use the hectoliters in excess.

Another strong push to the Po Valley economy was then given by the rice water-meadows, which still now exploit the countryside water ways. In old times, rice was usually imported from abroad, so it was very expensive and used mostly in pharmacology, but then, in 1468, the first Italian rice field was inaugurated in Milan, and in 1475 its cultivation allowed the Milanese Duke Galeazzo Maria Sforza to promise a remarkable gift of twelve bags of rice to the Duke of Ferrara.
Soon after, rice was no more an exclusive necessity sold by the apothecary, but became a typical element in the Milanese diet.

After these secular beginnings, our agriculture maintained almost identical techniques until the early twentieth century, when in the cartography of the Military Geographic Institute the enormous urban extension is shown destined for agriculture, well-distinguished from the built-up sphere.

Although the situation has drastically changed with industrialization, Lombard farming production is still high, just to mention Grana Padano and the rice for the Risotto alla Milanese recipe.

In order to maintain the quality, the 31 city farmers, on a total of on a total of 1500 hectares (3,700 acres), have gathered in the Consortium DAM (Milan Agricultural District), which enhances and supports their activities, even in the hopes of making Milan return to being a “country town” as it was until a few years ago! http://consorziodam.com/?page_id=104

But now what do they produce and offer in their little farms squashed inside a city?

The water-meadows technique has been overtaken, and most of them cultivate more practical cereals to feed cattle, such as corn, soybean, wheat, rape; some of them close the productive process by dedicating themselves internally to animal husbandry. 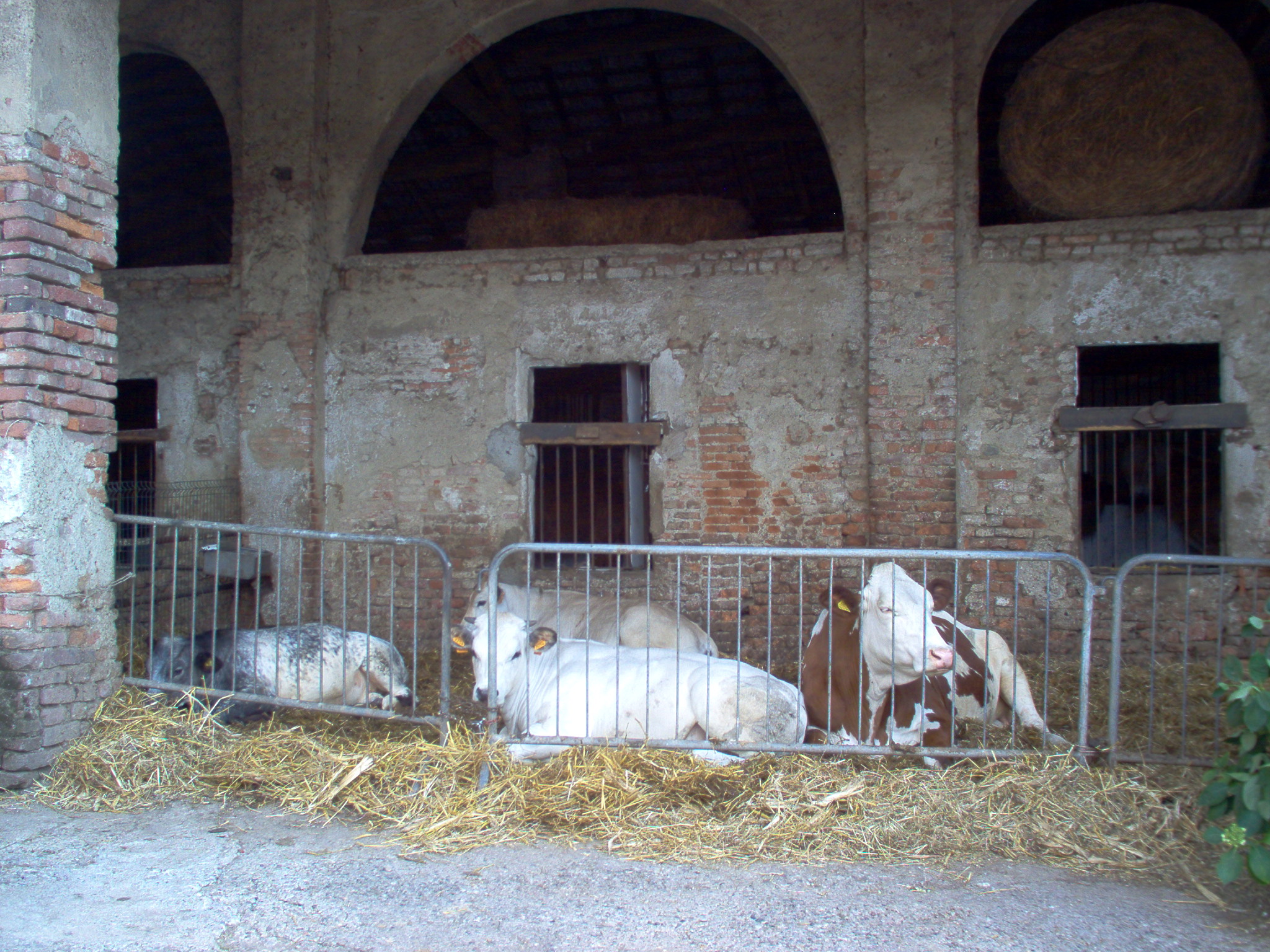 Others are oriented to protein crops for our recipes, such as lentils, peas, beans, or oily species especially soy, rapeseed, sunflower. Only a minority produce fruits or plants for gardening.
Many are breeding cattle, pigs, poultry, rabbits and buffalo for meat or dairy, or horses, ponies and bees. Some have opened direct selling points for their production, especially milk, honey and cheeses.

According to the DAM Consortium philosophy, some also devote themselves to children’s school teaching, or offer hinter ships to students at the Agrarian Institute, and for training at work; others agree to offer rural hospitality, camping, horseback riding, horseback riding trips, stables and animal retirement.

Often their structures are millenary, some settlements date back to Roman times, some walls and porticoes did form ancient monasteries, while some beautiful manor houses appear in town maps from the 5th or 6th centuries.

More recently, a major boost to the Po agricultural tradition was started on 24 May 1909 when the first European national park was set up in Sweden. Since then, this date has been recognized as the “European Park Day”, and for a week all over Europe farmhouses open to the public by offering tours, exhibitions, conferences, games and activities, creating exchanges and contacts between farmers and citizens.

Recently Milan has been administratively enlarged to a Metropolis, in fact it has taken the nickname of “Grande Milano” (“Greater Milan”) as it has linked many neighboring areas. Since 2007 it also manages the “Parco Agricolo Sud” (South Agricultural Park), which includes agricultural and forestry areas of 61 small belt municipalities, for a total of 47,000 hectares (116,140 acres), currently the largest in Europe.

This year, for the “European Park Day”, from May 22 to June 4, “Grande Milano” has launched the “Park in Park” event, with tons of open air activities and tastings.
An additional reason for families to discover the tradition of some unknown, healthy, and sometimes organic farmhouses where children could forget about tablets, to snack with bread and butter like we used to and even collect a bunch of flowers.
For Park in Park events, what’s on is available in Italian, http://www.cittametropolitana.mi.it/parco_agricolo_sud_milano/news/di-Parco-in-Parco-00001/

If you like to leisure in the country here are the adresses of the 60 Milan’s farmhouses divided by the 9 Belt Districts of course no one is in the city center!