To welcome spring we’re dedicating this month’s cover story to a little known Milanese Museum: the Museo Botanico Aurelia Josz, which focuses on nature and on the century-long human impact over the Po Valley, the green plain that stretches between the Alps and the Apennines. This museum was inaugurated in 2015 and is dedicated to Aurelia Josz.

Josz was born in Florence in 1869 to a Jewish family. She was a passionate teacher and promoter of women’s rights and emancipation. At the beginning of the 20th century she arrived in Milan with the aim of designing new educational tools that would better capture the students’ attention.

Convinced of the need for a modern vision of agriculture, in 1902, together with some of the most important Italian agronomists, she founded the first practical school of agriculture for women. There she established many highly successful courses, including silkworm breeding and beekeeping.

Initially her work was supported by the Fascist government, as the regime viewed it as compatible with its training project for the rural masses, but when Josz refused to swear allegiance to Fascism in 1931, the school was closed. She then went through a period of progressive isolation, during which she went on to write two essays. Despite the enactment of the racial laws in 1938, she did not expatriate. She was eventually deported to Auschwitz-Birkenau where she died in 1944.

Her rural school has somehow been revived on a nature reserve of 24,600 square metres (265,000 square feet) that features the lesser-known aspects of the Po Valley’s vegetation, biodiversity and ecosystem.

The place is also suitable for relaxing and taking part in guided tours (on request in Italian, English, French or German), recreational activities, music and shows focusing on the themes of botany, to discover the secrets of the plant kingdom.

The museum is divided into various sectors.

The Orchard of the Patriarchs

This orchard covers an area of 900 square metres (9,600 square feet) and it features 27 tree varieties grafted on rootstocks, found in the territory from native species, some of which are 200 years old. As these rare plants are capable of establishing a defensive strategy against fungi, insects, etc., they need very little care. Actually in the orchard there are old varieties such as apple, pear, cherry, mulberry, olive, plum trees, a fig tree and a caprifice, a peach, a cherry and a Diospyros lotus, whose fruits have particular organoleptic characteristics and remarkable nutritional properties. 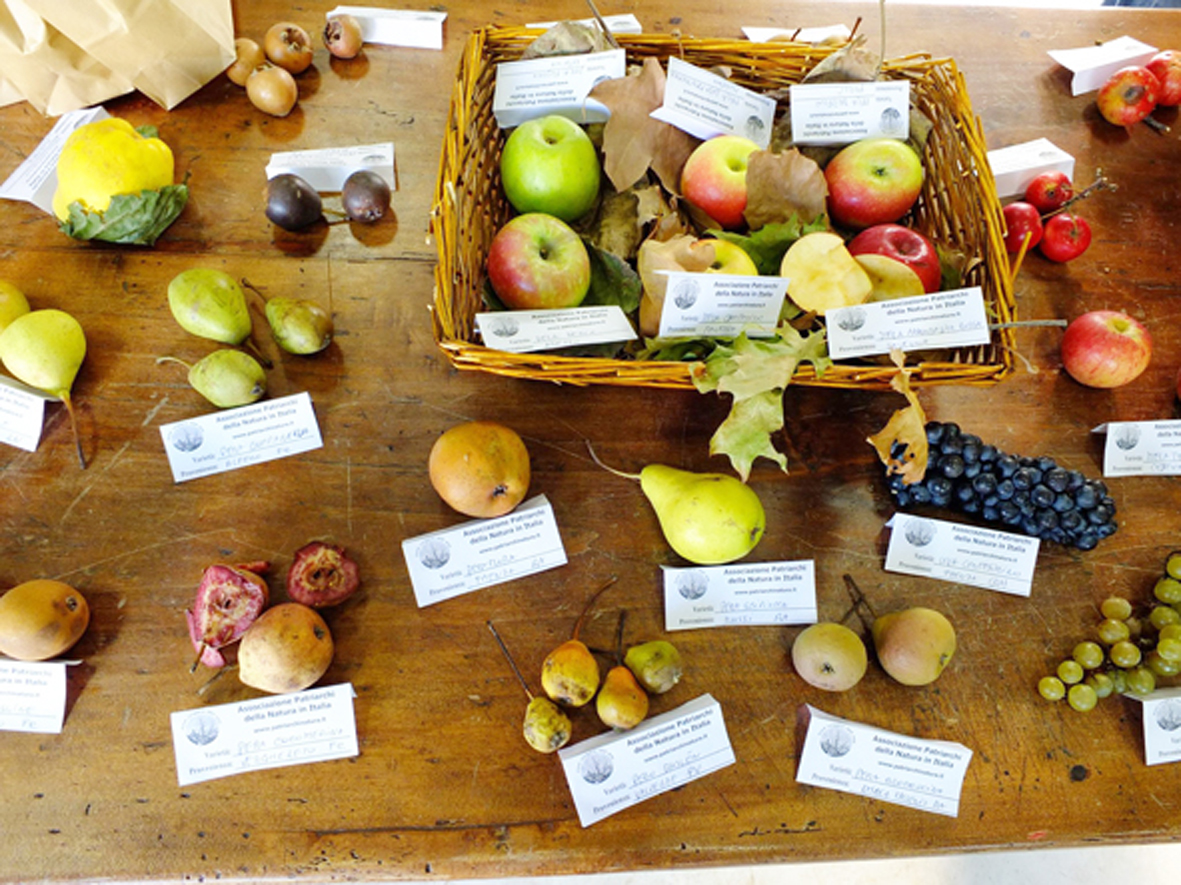 The Labyrinth of Cereals

This part of the museum is a maze that covers an area of 1,970 square metres (21,200 square feet) and hosts a rare collection of cereal varieties together with some of the most widespread intensive crops, such as many kinds of imported corn.

In 2014/2015 different varieties of spelled, durum and soft wheat, barley, rye, triticale, oats and corn were sown, while in 2015/2016 it was the turn of vetch, clover, horseradish, mustard, flax, barley oats, rye, hard and soft wheat and corn.

This is meant to improve soil fertility, recalling the Middle Ages practice to fertilize the land using the rotation system and the green manure. The latter is used by leaving uprooted or sown crop parts to wither on a field so that they serve as a mulch and soil amendment. Herbs and plants used for green manure are often cover crops grown primarily for this purpose. Typically, they are ploughed under and incorporated into the soil while green or shortly after flowering.

The rare organic seeds of the species were donated by the CREA, the Ministry of Agriculture Council for agricultural research and agrarian economy analysis, conceived to give Italy a top-level research centre, to support agricultural enterprises, protect and promote the national agri-food sector. Moreover, the Bank of Germplasm, the Department of Agriculture, and the Vicenza Province Institute of Genetics and Agricultural Experimentation “Nazareno Strampelli” also joined in the donation.

Strolling inside the maze visitors will probably get lost. In order to find the exit they must play the “Game of the Labyrinth,” a fun journey designed to learn about important topics, such as: natural evolution, selective breeding, genetic research, the life cycle of plants and more over seed knowledge as a vital treasure.

The Water Path
Another important sector of the museum includes an area of 2,200 square metres (23,680 square feet), crossed by a circuit of canals, with viewpoints for watching wild flora and fauna. It is a place where visitors can learn about the spontaneous actions of Nature, and also a laboratory for marsh and aquatic plants research. Many of them have been uprooted from their environment and then transplanted here thanks to the work of many volunteers. Other rare plants were found at the Boscoincittà “Water Garden”, a Milan city park, run since 1974 by Italia Nostra, an Italian association for the protection of cultural, artistic and natural heritage.

The Multipurpose Building
Built on an area of 300 square metres (3,200 square feet) this construction is camouflaged by a green covering, made with clematis interspersed with roses, hops, honeysuckle, Canadian vine, hydrangeas, and designed to compensate for its energy needs thanks to a photovoltaic system and a heat pump. It is used as a space for activities that require a covered space.

Being fairly new and not totally completed, this museum is not yet open on a regular schedule, but it does welcome collaborations with schools and associations that share its aims.

Opening: once a month on Saturday afternoon, and during the various botanical events in Milan such as Orticola, Green City Milano, FAI Spring Days.

For tours bookings and info: museo.botanico@comune.milano.it