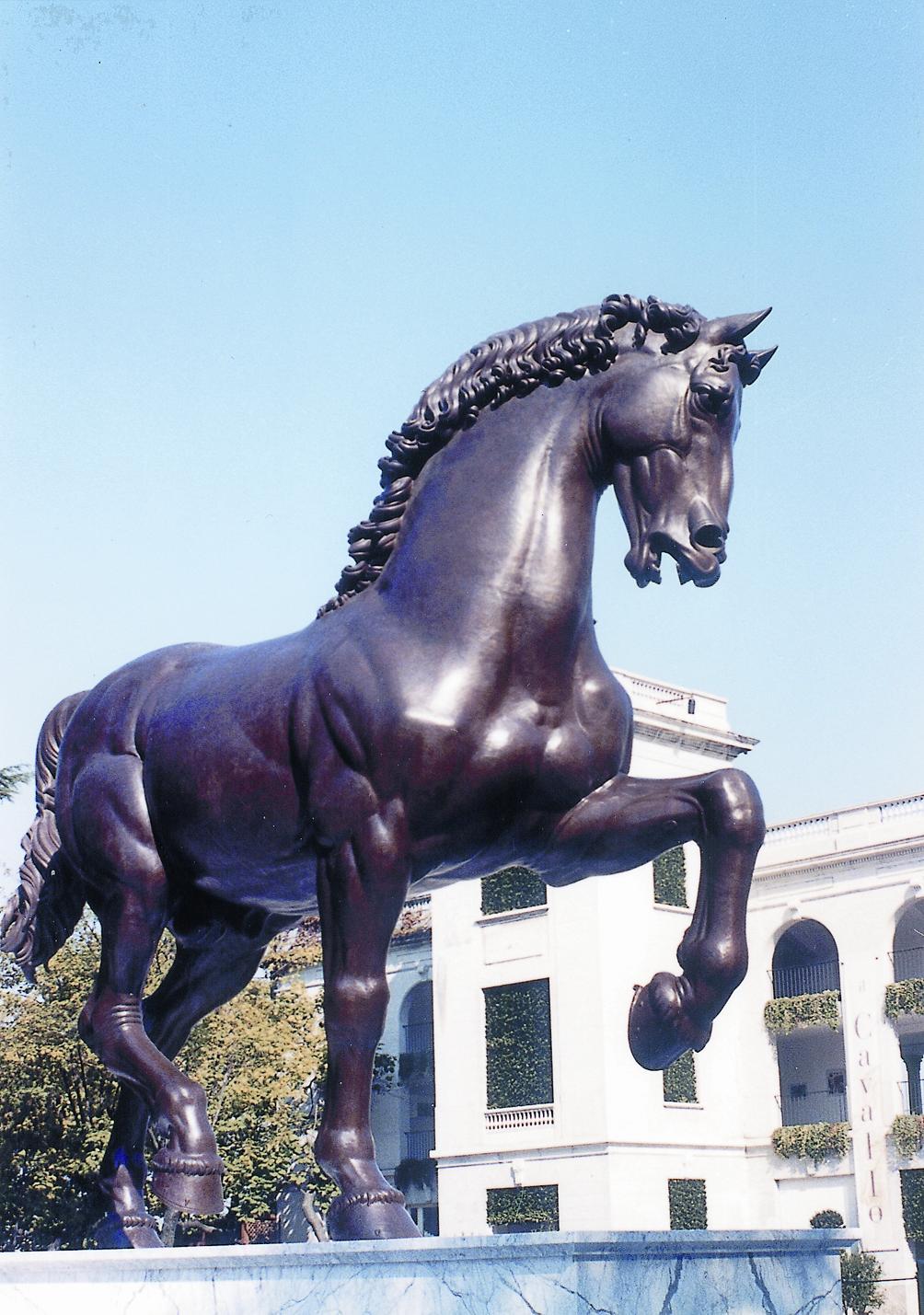 Leonardo worked on the project for the greatest equestrian monument of all times from 1482 to 1499: he virtually completed the original, in plaster, ready for casting, but the great sculpture was destroyed by the French invaders who ousted Leonardo’s patron, Ludovico il Moro, from power. Now, the fantastic project has become reality.

In 1977, Charles Dent, American pilot and a great enthusiast of Renaissance art and Leonardo in particular, read about the story in National Geographic magazine, and decided that it was time to build the horse. He collected all possible information on Leonardo’s many sketches, drawings, studies and notes on the mammoth sculpture. In 1982 the “Leonardo da Vinci’s Horse Incorporation” was founded, a non-profit organization whose sole purpose was the creation of the monument. The first model, about 8 feet high, had been completed by 1992; a fibre-glass version was completed the year after; but Charles Dent died on Christmas day, 1994. But the Foundation had gathered steam, and it was not long before a 24-foot version had been completed by the sculptress Nina Akamu. The Tallix Art Foundry, Beacon, New York, used 12 tonnes of bronze to cast the horse in 60 pieces, that were then welded together to form 7 subsections. These were transported to Milan on 19th July 1999, assembled here, and the final sculpture was unveiled by the American ambassador Thomas Foglietta on 10th September. 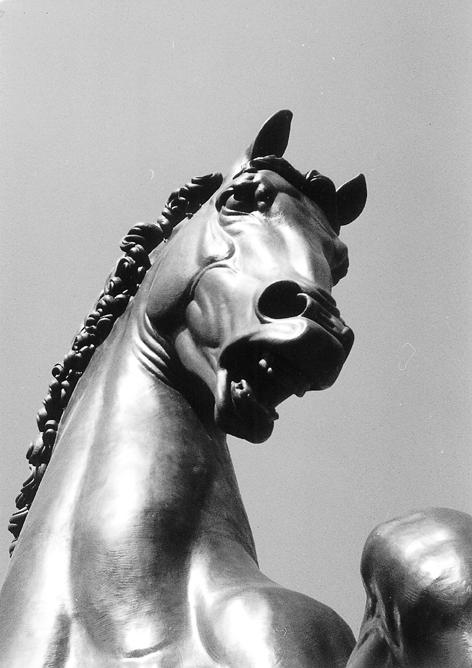 This, the largest equestrian monument in the world, is a modern reconstruction of a monument brought to the casting stage by Leonardo in the late 15th century, but that was destroyed before it could be cast. This version, installed in 1999, was sculpted by an team brought together by the American ex-airline pilot Charles Dent, on the basis of Leonardo’s drawings and notes. There are panels in English and Italian describing the history of this extraordinary monument. Unfortunately it is not centrally located. If you use public transport, there is a bit of a walk (as above). Alternatively use the Metro to MM1 Lotto, then take a taxi. To return to MM1 Lotto, you can phone the taxi rank there on 02.469.51.19.

The return of Leonardo’s horse
Leonardo da Vinci worked in Milan from 1482 until 1499, in the central part of his career, and he left an enormous influence on art in the city. Apart from the world-famous Last Supper, he also painted many portraits, as well as the Virgin of the Rocks, and introduced the shaded, atmospheric colours that hallmarked his style and that was imitated by his pupils and many other painters.

However he was unlucky with many of the projects on which he worked. The Last Supper was terribly damaged by the dampness of the wall on which it was painted, and then by the countless restoration and repainting operations over the following centuries. The ceiling in the Castle whose decoration he designed was whitewashed over when the room was converted into a stable by the French invaders in 1499: this fresco was only rediscovered in the late 19th century, and still awaits a good restoration.

But the most bitter episode for Leonardo was undoubtedly that of the monument that was commissioned from him by Ludovico Sforza, Duke of Milan. Ludovico wanted a large equestrian monument dedicated to his father, Francesco Sforza, that was to be installed in front of the Castle, and Leonardo began work on plans for a colossal statue. Originally the monument was to have been a rider on a horse rearing up on its back legs, with just two points of contact with the ground, but this proved too problematic even for Leonardo, and he returned to a more conventional scheme of a horse walking. As was his custom, he made hundreds of sketches showing the anatomical details of horses, the structure of the sculpture, and technical diagrams on how the monument would be cast in bronze. With a planned height of nearly 9 metres, it was far larger than anything that had ever been cast before. He then started work on the full-size original, made in plaster and clay on a skeleton in timber: from this the mould would be taken that would then be used to make the final version in bronze.

The original (just a horse, the rider having been abandoned) was complete in 1499, and all that was needed was the bronze for the casting. But Ludovico was at war with the French, and so the bronze that he had ordered for his monument was diverted to cannons. When the French armies defeated Ludovico and captured the city of Milan, they found the huge clay horse in a courtyard, and used it as a target for crossbow practice. In the space of just a few days, Leonardo’s magnificent sculpture had been reduced to a pile of rubble.

In 1978, the National Geographic magazine published some of Leonardo’s preparatory drawings for the sculpture, which had been discovered a decade earlier in the National Library of Madrid. The article was read by Charles Dent, a retired airline pilot from Pennsylvania in America who had long been passionately interested in Leonardo da Vinci’s work. His imagination was fired by the sad story of the horse, and he decided that he would bring it back into existence.

He founded the “Leonardo da Vinci’s Horse Inc.”, gathered as much information as possible on Leonardo’s drawings, and started the process of financing the scheme by selling pieces from his extensive art collection. By about 1990, thirty people were working on the project, bronze-casting experts, architects, structural engineers, and sculptors Nina Akamu and Rod Skidmore. In particular Akamu, born in Oklahoma of Japanese-Chinese origin, had the difficult task of developing Leonardo’s drawings, most of which where just a few centimetres in size, to the scale of the final monument.

In December 1994, Charles Dent died, but the foundation that he had created continued his work. Finally in July 1999, Leonardo’s horse arrived in Milan, almost exactly five hundred years after his clay original had been destroyed. It was installed in the green, peaceful surroundings of Milan’s racecorse, in the San Siro district, where it can be seen every day, free of charge, from 9.30 to 18.30. The piece, in 18 tonnes of bronze, rests on just two of the horse’s four hooves, on a base in white Carrara marble. Another casting of the same horse was unveiled in October 1999, at the Frederik Meijer Gardens, Grand Rapids, Michigan (USA).