The “A Friend in Milan” www.friendinmilan.co.uk service can organize a personalized visit that includes the Sala delle Assi painted by Leonardo da Vinci, and the Pietà Rondanini last masterpiece by Michelangelo.
The Castle is situated in a position that was once on the city walls, at least at the height of its development in 1450-1500. It was founded in about 1350 by Galeazzo II Visconti, extended by Gian Galeazzo Visconti (who also founded the Cathedral), greatly damaged by public uprising after the demise of the Visconti reign, rebuilt and extended by Francesco Sforza in 1450, and finally rendered one of the finest palaces of the Renaissance by Ludovico Sforza.

In 1500, Ludovico was defeated by the French invading army, and over the next four hundred years, during which Milan was a territory belonging alternately to the French, Spanish and Austrians, the Castle gradually deteriorated until about 1895, when the Municipal government had to decide whether to bulldoze what was left and build houses, or restore it. Luckily they decided to restore it, and during restoration rediscovered a Leonardo da Vinci fresco as well as preserving Milan’s second major monument (after the Cathedral). The Castle is most easily reached from the Metro stop Cairoli (MM1, red line), but it is a very pleasant walk from the Cathedral, down Via Mercanti, Piazza Cordusio and Via Dante. In the latter street, there are many cafés that make an agreeable break for a coffee, beer, ice-cream or aperitif depending on your mood or the time of day.

In front of the castle, the spectacular fountain is a reconstruction (1999) of a fountain built in 1930, during the Fascist regime: the “bundle of rods” emblem that symbolized Mussolini’s dictatorship can be seen in the decorative motif around the central vat. The people of Milan call this fountain “tort de’ spus”, or wedding cake, from the shape created by the jets of water. 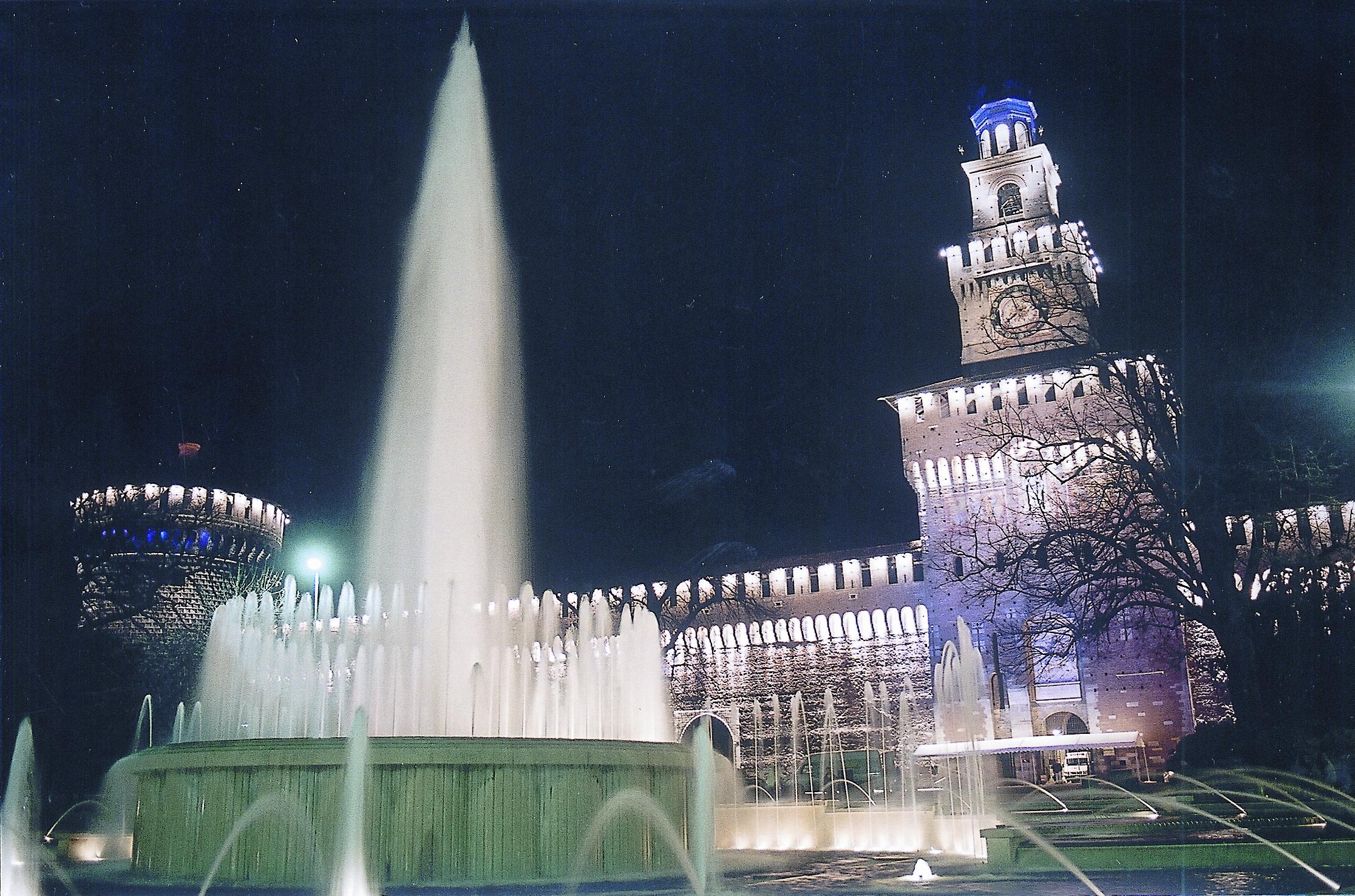 The main entrance of the Castle is through a gate crowned by an elaborate tower, rebuilt during restoration in 1900-1905 by the architect Beltrami to approximately the original design by Filarete, 1452: this tower was destroyed by a gunpowder explosion in 1521. The bas-relief of a man on a horse is of king Umberto I, king of Italy during the years of the reconstruction of the Castle.
The clock further up features the “sun of justice” motif, one of the symbols of the Visconti family, later adopted by the Sforzas. The circular towers at the two southern corners of the Castle were built in about 1455, and were an important part of military defence: they actually faced the city, and so illustrate the uneasy reign of the Dukes of Milan over the people. They were also used as dungeons, as proven by various macabre remains discovered in their lower rooms. The main courtyard, Piazza d’Armi, was used for military exercises and parades. The low buildings abutting the inner walls are also reconstructed, but Ludovico Sforza, before he took control of the city by means of a coup, actually lived in this part of the castle (to the right of the entrance going in).

The battlements, mostly reconstructed during the 1900 restoration, are built leaving a gap through which stones, boiling oil or molten lead could be dropped onto assailants. Larger gaps provided a convenient means of getting rid of unwanted prisoners. On the right-hand side of the Castle, a

drawbridge has been reconstructed: the complex originally included a total of 62. The statue towards the bottom of the courtyard represents a saint named San Giovanni Nepomuceno, it was installed in 1752. The tower at the bottom of the courtyard was built by Bona di Savoia, wife of Galeazzo Maria Sforza who was assassinated in the church of Santo Stefano in 1476. Most of her suspicions were directed towards Ludovico, brother of Galeazzo Maria, who was living on the other side of the courtyard. She built her tower not as a form of defence against potential invaders, but in order to keep a watchful eye on Ludovico. But to no avail: in 1480, at about lunchtime (when most of Bona’s household were eating or sleeping), Ludovico kidnapped Gian Galeazzo, exiled Bona, and had her advisor Cicco Simonetta decapitated, “but with honour”, as Ludovico generously granted him. The gate at the bottom of the courtyard, Porta Giovia (itself defended by a moat and drawbridge) leads to the part of the castle that was used by Ludovico as his personal palace. The “Corte Ducale” was extensively restored in 1900, but resembles its 15th-century state. After the gate, on the right is the entrance to the Castle Museums, an itinerary that includes some lovely interiors and many interesting remains from various ages. We can mention the equestrian monument to Bernabò Visconti (14th century); a tapestry known as the “Gonfalone di Sant’Ambrogio” depicting Milan’s patron saint, Ambrose, created in 1565; the Sala delle Assi with its ceiling decoration of tree-branches and knots, designed by Leonardo da Vinci and executed by his pupils and assistants; the Ducal Chapel with frescoes dating to about 1470; and the Rondanini Pietà by Michelangelo, a sculpture on which he was working up to his death at the age of 89. Also fascinating are the frescoed ceilings, featuring the various Visconti-Sforza emblems (sun of justice, eagle, serpent devouring a man).
The ground floor itinerary emerges into the Corte Ducale, from where you can go up the staircase to the first-floor picture gallery and the extensive collections of furniture, musical instruments etc. The staircase has shallow steps from its origin: in fact it was made like that so that Ludovico could ride straight up to his apartments, without having to get off his horse. Opposite the Corte Ducale is La Rocchetta, a stern courtyard with porticoes by Filarete, Ferrini and Bramante. To conclude, the north-western gate of the Castle looks onto the park, Parco Sempione, in an area that seems to be perpetually undergoing building work. At the bottom of the park, you will see the Arch of Peace, built to order of Napoleon starting from 1807, to celebrate his victories. Unfortunately Napoleon met his Waterloo in 1814 and the Arch was only two-thirds complete, but the new Hapsburg Austrian emperor decreed its completion.