The enormous building of the Central Station is one that people tend to arrive at and flee from as quickly as possible, but it is worth at least a brief look while you are there. 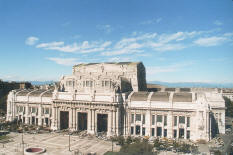 It was designed by Ulisse Stacchini in 1912, and he combined the style in vogue then, Art Deco, with the grandeur of Ancient Roman thermae, including an extensive use of mosaics, bas-relief sculpture and ceramic decoration reflecting the nationalistic fervour that was sweeping the country. The decision to keep the train lines at a higher level than the streets induced him to design the great monumental staircases.
Work on the station was interrupted during the First World War, started again rather sleepily in 1919, and finally gathered momentum in 1925. The 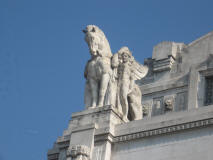 Fascist regime that had meanwhile come to power found the design perfect for its grandiose approach to things, and so the project was enlarged, with the five enormous cylindrical canopies in iron and glass added to protect travellers on the platforms instead of the series of platform-wide shelters originally planned: various motifs expressing the regime and depicting Mussolini were also added.

The station was opened in 1931, and has remained virtually the same since: the Fascist emblems were removed after 1945 (a few remain in rather hidden locations), and in one of the mosaics on the first floor departures gallery, Mussolini’s face has been removed while leaving the rest of the scene intact. The building is remarkable in its sheer scale, and in its decorative programme that bears comparison, in concept, with the Cathedral: its connections with Fascism have led to neglect on the part of historians.