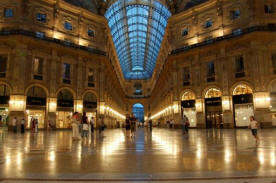 The architect Mengoni was responsible for refurbishing piazza Duomo in the mid 19th century, and he also designed the sumptuous covered arcade, Galleria Vittorio Emanuele, that has always been the traditional meeting-place for an informal business discussion, socializing, or just watching the people of Milan go by.
At the time (1865-78), the use of iron and glass for the roof was innovative, even daring (the Eiffel tower would be built in 1889): the concept of a covered arcade with shops on the ground floor, offices and apartments on upper floors, was also new at the time, and would be copied, for example in Naples and in Moscow. Richard Rogers acknowledged the influence of Galleria Vittorio Emanuele in his design for the new Lloyds building in London. The foundation stone was laid in 1865, by the king of Italy himself. The emblems on the mosaic floor include those of four cities, Milan, Rome, Florence and Turin: the latter two were capitals of newly-united Italy before the decision was made to make Rome the capital. In particular, the emblem of Turin, a bull, has become a means of procuring a shot of good luck for the people of Milan. Just watch and you’ll see how it’s done, and remember that the rotation has to be clockwise, because otherwise the good luck becomes bad. Above, the mosaics in the semicircular pedentives under the glass dome represent the “four corners of the earth”: Egypt, north America, south America, Greece. They were originally frescoes, but were replaced in mosaic in 1910.

Mengoni was also responsible for the harmonious rectangular architecture of Piazza Duomo itself: the entrance to Galleria Vittorio Emanuele is incorporated into the Neoclassical north side of the square, and the southern side is in the same style. The design was never carried through to the west side, however, and this is due to an accident that occurred in the Galleria. On the day before Galleria Vittorio Emanuele was inaugurated, still unfinished, Mengoni was busy inspecting some decorative work from the scaffolding. He placed a foot wrong and fell to his death, and so part of his design for the Cathedral square remained uncompleted. His Galleria, glittering heart of social Milan, for many years the focus for writers, opera singers, composers and artists as well as for society at large, is a fitting monument to this brilliant but unfortunate architect.