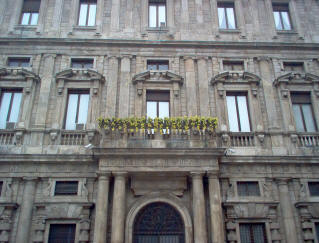 Palazzo Marino was commissioned in 1558 by Genoese banker Tommaso Marino from architect Galeazzo Alessi, with instructions that “When finished, it should be the finest palazzo of Christendom”. Marino was a senator in the Spanish government that ruled Milan in those years; he lent money to the emperor, the Pope, the viceroy of Sicily, and he collected taxes in Milan. His extensive household included an “army” of 27 men authorised to circulate in the city fully armed and “licenced to kill”. Palazzo Marino became the seat of the municipal government in 1861, when Italy finally won its independence. The facade facing Piazza San Fedele is original, built by Alessi: that facing Piazza Scala is almost identical, but was built by Luca Beltrami in 1889.