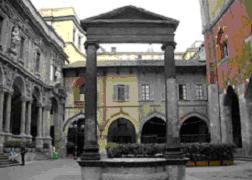 The north-west corner of Piazza Duomo opens into a pedestrian street, Via Mercanti, and this brings you to the Medieval heart of the city. Originally an enclosed square, the area has a large brick building at its centre, Palazzo della Ragione.
This building was founded in 1228, and for hundreds of years was the centre of Milan’s government and trade. Under the porticoes, notaries and laywers had stalls at which they settled deeds and transactions of all sorts: on the first floor, meetings of the City council were held, with the 900 representatives (at that time, Milan had a population of 150,000).

The top floor of Palazzo della Ragione is a later addition: the building is empty and disused at present. On the south-west façade there is a high-relief equestrian monument (perhaps the earliest of its genre in Medieval art) of Oldrado da Tresseno, at the head of the city-state when the building was erected: it is thought to be by the greatest early 13th-century sculptor in Italy, Antelami, but, like the rest of the building, it is in a sorry state.

At the centre of Piazza dei Mercanti there is a well, and at the end of the Piazza, Gothic arches with terra-cotta surrounds are what remain of the 15th-century Palazzo dei Notai.