San Lorenzo is a lovely building, with an enormous heritage of history, but unfortunately repeated fires, destructions and collapses have made its interpretation similar to the task of a paleontologist who reconstructs an epoch from fossils. Very large (the tallest and most spacious of Milan’s churches after the Cathedral), it was founded soon after the edict of Milan (313 A.D.) in which emperor Constantine granted freedom of religion to the Christians. 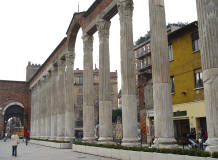 Constantine is remembered in the modern copy of a statue in the square in front of the church: the row of Attic-Corinthian Roman columns were erected here using materials taken from a preceding Ancient Roman building to enhance the visual effect of the church. Both columns and statue survived the Second World War bombing thanks to sandbagging from bottom to top.

The architecture of San Lorenzo is in that remarkable current of early Christian engineering that developed the central-plan Ancient Roman mausoleum pattern, surmounted by a dome (other examples in Milan can be seen in the Paleochristian baptistries under the Cathedral), into the spatial masterpieces of San Vitale (Ravenna, 540 A.D.) and Hagia Sophia (Constantinople, 537 A.D.). San Lorenzo itself was in fact built in 450-475 A.D., and it features a large central dome supported by half-domes, with solid support provided by four square corner towers. In 560 A.D. northern Italy was conquered by the Longobard peoples, and the early Christian period of architecture ended for ever. The interior of San Lorenzo was once a triumph of mosaics, but fires in 1071 and 1124, and then the collapse of the dome in 1573, irreparably marred the decorations.

The most important sights are in a chapel on the right dedicated to Sant’Aquilino (there is a small entrance charge). It dates back to the 4th century A.D., and it was originally a separate church. The Roman queen Galla Placidia, sister of Emperor Onorius, intended it to be her mausoleum, and installed a large sarcophagus, still visible on the left (she actually died elsewhere). In this first space, there is a 12th-century fresco of the Deposition, and early Paleochristian mosaics showing Biblical figures. These mosaics are important for art historians because they predate and anticipate the splendours of San Vitale. An incomplete fresco of the Crucifixion dates to the early 14th century. A marble portal (intricately decorated with birds, “putti”, fruits etc.)was certainly recycled from an Ancient Roman building, and it leads into the octagonal chapel of Sant’Aquilino, containing many fragments of the original pictorial cycles. At the eastern end, the small chapel contains a crystal casket containing the remains of Saint Aquilino: above, 16th century frescoes. To the left of the altar, a staircase leads downwards (there is a light switch on the left) to the foundations of the original chapel, where you can see how the early Christian builders used all sorts of blocks taken from other Ancient Roman buildings. There are various other paintings and architectural relics in the other chapels, some of which are in varying states of restoration.

However, we can mention a curious fresco, on the left of the entrance: it is a copy of Leonardo’s famous Last Supper, created by an anonymous painter in the early 1500s: as you can see from the pit marks, it was successively covered over with plaster (builders have to chip holes in the plaster below to ensure that the new plaster sticks on) and rediscovered during restoration. Behind the church, a green area provides a pleasant viewpoint towards San Lorenzo and its complex architecture, and it continues across the road to the Basilica of Sant’Eustorgio. The Municipality of Milan, in its desire to make the area more amenable, rather went overboard with the lighting!