Santa Maria delle Grazie was built in the latter half of the 15th century, as a Dominican monastery, and in fact until 1490 it was named San Domenico. But the Duke of Milan, Ludovico Sforza, wished to make this into his family mausoleum, and in order to do so he summoned Florentine architect Donato Bramante and commissioned the total reconstruction of the church in the new Renaissance style. At the same time, Leonardo da 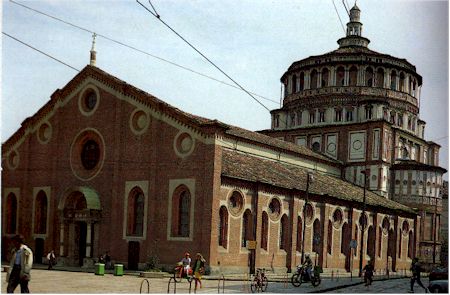 Vinci was commissioned to paint the Last Supper in the adjoining refectory. Bramante started work at the east, apse end, along with the Sacristy and the Small Cloister to the north of the apse. But in April 1500, Ludovico was defeated by the French and exiled, and so reconstruction came to a halt. This is why the church is partly in the severe late Lombard Gothic architecture favoured by the Dominicans, and partly in the gloriously harmonious Renaissance architecture visible in the apse and dome. This contrast is also visible inside, from the relatively low and dark nave to the spacious geometrical spaces near the altar.

The first chapel on the right includes a painting by Bonifacio and Benedetto Bembo, along with a 15th-century tomb; in the fourth chapel on the right there are frescoes by Gaudenzio Ferrari dedicated to the Passion (1540 circa). The next chapel features Mannerist frescoes by Giovanni de Mio da Schio (1541). The first chapel on the left includes remains of frescoes by Montorfano, 1490 circa, the painter who also created the Crucifixion in the refectory, opposite the Last Supper.
A wooden door in the left transept leads to the Chiostro Piccolo (small cloister), one of the most beautiful and peaceful locations in Milan. On the west side of this cloister, there is a small slab with the words Beatrix Dux, recalling the death of Beatrice, Ludovico’s wife; while on the east wall there is a slab with a bas-relief of Ludovico himself. The funeral monument that he had commissioned from Solari, which remained in the church until 1564, can now be seen in the Certosa di Pavia, a monastery to the south of Milan.

The Last Supper is not accessible from the church: the entrance is to the left of the church in Piazza Santa Maria delle Grazie.